Editor’s note: This is part 2 of 2 (part 1) in a longer format on Investing in Legal Cannabis. Article quick links:

Cannabis and Banking
The federal status of marijuana has implications for private and public companies in banking as well. Both credit card companies and banks are reticent to support marijuana companies as clients, due to the lack of a federal mandate. Under federal law, banks must disclose marijuana-related transactions as suspicious activity. For banks, this could mean bringing unwanted federal attention and regulatory scrutiny if they choose to service the cannabis industry. As a result, large banking institutions are refusing to support cannabis-entrenched businesses. In fact, JP Morgan Chase & Co. and Bank of America have made it company policy to not work with the marijuana industry. Chase says that, “as a federally regulated institution, we don’t process payments for businesses participating in federally prohibited activities.” Some small independent banks, however, are open to getting involved. Following a 2014 directive from the Financial Crimes Enforcement Network (FinCEN), an arm of the Department of the Treasury, banks are allowed under law to service marijuana businesses as long as they comply with anti-money-laundering regulations.

As marijuana is illegal under federal law, the U.S. dual banking system, with both federal and state chartered institutions, becomes conflicted. Given that federal law enforcement and federal financial regulators have significant power and oversight with the ability to punish institutions that are non-compliant with federal statues, significant barriers exist. As cash businesses, companies large and small are left with the option of paying their employees, suppliers, and vendors in cash, in addition to paying their sales and income taxes in cash. An estimated 70% of cannabis businesses have no bank accounts, and losing your first banking relationship has become a rite-of-passage for those in the business of cannabis.

According to FinCEN’s Marijuana Banking Update, based on Suspicious Activity Report (SAR) filings, there were approximately 400 depository institutions actively providing banking services to marijuana businesses in the U.S. as of September 30, 2017. Less than 100 of those were credit unions, while the rest were banks. FinCEN’s data show that the agency received a total of 39,025 SARs using key phrases associated with marijuana-related businesses by the end September 2017. 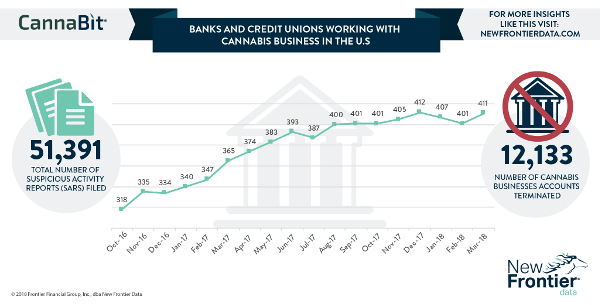 Cannabis and banking are a political game that has been an ongoing challenge to the industry. There are several pieces of legislation winding their way through the U.S. Congress that could potentially remove the current banking restriction and, more importantly, 280-E expenses currently disallowed by the IRS, as discussed below.

Taxes
Since cannabis remains designated as a Schedule 1 controlled substance by the U.S. government, many basic business expense deductions are not allowed on federal tax returns under Internal Revenue Code Section 280-E. Section 280-E, enacted in 1982, basically states that someone who is doing something that is illegal federally can only deduct their Cost of Goods Sold (COGS) for federal tax purposes. In short, Section 280-E prevents cannabis producers, processors and retailers from deducting any business expenses from their income, except for those considered COGS. Obviously, this inability to offset business expenses creates a hindrance for cannabis companies. Interstate commerce is also prohibited by the Schedule 1 classification. This puts a ceiling on both the ability to scale and the amount of growth businesses can achieve, because they are constrained by federal law, which discourages larger, publicly traded companies from participating in the industry.

There may be some paths to explore regarding court rulings. In the 2007 tax court case of Californians Helping to Alleviate Medical Problems, Inc. (CHAMP) v. The Commissioner, a California medical marijuana dispensary won its case against the IRS allowing medical marijuana companies to deduct expenses that could reasonably be separated from the trafficking of marijuana (as CHAMP offered caregiving services, education, and support for patients in addition to selling marijuana). Using Section 236-A, state-legal cannabis businesses are also allowed to capitalize on indirect costs like inventory and administrative costs, and state excise taxes where they can be deducted under COGS. As a consequence, marijuana businesses are required to determine what expenses are included in COGS and, therefore, what expenses are deductible.

On January 23, 2015, the IRS released an internal legal memo which provided guidance to examiners on how Section 280-E should be applied in the cannabis industry. Per the memo, a retailer can include the invoice price of the cannabis, including transportation and other charges incurred in acquisition. A producer can include direct material and labor costs, as well as certain indirect costs such as depreciation, insurance and factory operational expenses in COGS. This memorandum, however, may not be used or cited by taxpayers or preparers as precedence.

Recently, the United States Court of Appeals for the Ninth Circuit ruled on Canna Care v. The Commissioner. The Court upheld the United States Tax Court’s ruling denying a California dispensary’s operating expense deductions under Section 280-E. The Tax Court held that, unlike CHAMP, Canna Care’s only business was selling cannabis, and therefore, none of its operating expenses could be deducted under Section 280-E. It should be noted, however, that the Ninth Circuit Court of Appeals did not rule on the merits of Canna Care’s 8th Amendment claim of excessive and burdensome fines, and it’s possible that a federal court might someday rule that the IRC 280-E is unconstitutional. Therefore, cannabis businesses that file a protective refund claim could theoretically recover taxes paid for that year.

Due Diligence: Evaluation, Valuation, and Investing
Medical marijuana and recreational cannabis company due diligence considerations are distinguished from pharmaceutical and biotech cannabis businesses in a few fundamental ways. The former companies are evolving in an ever-changing regulatory ecosystem, while the latter are guided by succinct FDA regulations and guidance. Cannabis companies, whether consumer packaged goods companies, retailers, growers, processors, analytical quality labs, ancillary service companies, or pharmacy dispensaries, do not lend themselves well to standard metrics and methods of evaluation or valuation. Multiples of revenue, EBITDA, Net Operating Profit, etc. in the cannabis economy have their own biases and predilections.

When evaluating companies in today’s cannabis economy, it becomes necessary to reference the proper prevailing industry proxies for comparison and to handicap key performance criteria accordingly. Net Present Value of cash flows is not uncommon. With respect to performing due diligence on other business aspects, a well-developed strategic business plan, experienced senior executives with an appreciation of business risk, and a strong operating team with tactical business execution experience are key diligence rules that still apply.

Seasoned executives from industries that parallel are consumer packaged goods and pharmaceuticals, where there is a proven discipline and strategic mind-set to rely upon. Industry knowledge (whether direct or parallel) and operating expertise go a long way to avoiding costly tactical mistakes. Whether potential strategic partner, investment target, or other, the key to the due diligence formula is identifying those cannabis companies with proven players that have the potential to navigate the landscape and to excel.

Compliance
The cannabis business is in the early stages of creating an ultra-compliant industry where anyone who deviates from the path set by the state will be viewed, essentially, as a bad actor. Those who have been in the industry for a while will need to accept this as the new reality. As for new entrants to the cannabis marketplace, strict compliance to state policies should be a primary focus.

Self-Regulation Organizations (SRO) are starting to emerge. SROs not only need to be mindful of their own businesses, but also pay attention to compliance issues from many different regulatory bureaus. They may include:

Conclusion
Despite continued federal opposition to legalization, burdensome tax rules at both the federal and state-levels, and complexities to valuation, “cannabusiness” is beginning to thrive. Many see opportunity as they drive their way through the twists and turns of state-by-state regulations in a forbidding federal landscape. Cannabis has so far demonstrated that it has the potential to create jobs, contribute to economic growth, and provide tax revenues where the product is permissible. Suffice to say, the navigational guidance and diligence of industry experienced professionals is well worth deploying.

About the Author
Leslie Bocskor is the Executive Chairman of Electrum Partners, a business advisory services company in the legal cannabis industry. Please direct inquiries to the Contact form on our website.
Follow Leslie on Twitter: @lesliebocskor
Follow Leslie on LinkedIn: https://www.linkedin.com/in/lesliebocskor

Marni Pankin is a Partner in the Firm’s national Alternative Investment Industry group, responsible for advising clients on the formation and operation of investment funds.
How Marcum LLP Can Help
Given the varying state regulations and state and federal tax implications, now is a good time for professional investors, operating companies, and ancillary services organizations conducting business in the fast growing yet fluid regulatory environment of the cannabis arena to contact Marcum LLP. Marcum LLP provides tax, audit, and business services to clients in multiple cannabis-related industry sectors and jurisdictions.