Editor’s note: This is part 1 of 2 (part 2) in a longer format on Investing in Legal Cannabis. Article quick links:

Introduction
Right now, we are seeing a very rare occurrence in the history of the world’s economy: the transformation of black market cannabis into a regulated, lucrative, global industry. 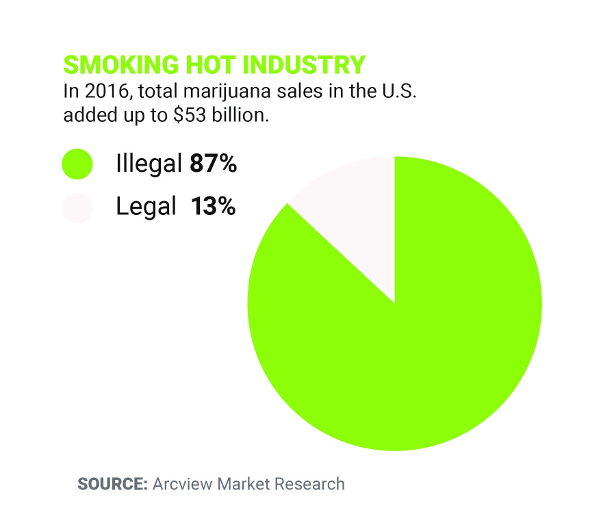 The migration of a black market to a regulated market (according to studies by the UN and RAND Corp in 2010 of over $40 billion a year in adult use of cannabis only) is often compared to the end of prohibition of alcohol in 1933 and the repeal of the Volstead Act. The reasons for the comparisons are obvious. Both alcohol and cannabis can induce euphoric sensations, and both were prohibited. However, the parallels end there.

Here are the key differences:

When one considers the enormous markets for pharmaceuticals, nutraceuticals, supplements, and numerous therapeutic treatments, and the many conditions cannabis and hemp may be used to treat – such as pain management, insomnia, nausea, and eating disorders – it becomes clear that the opportunity is once in a lifetime. In fact, I would argue that, like pharmaceuticals, it is a trillion dollar industry.

I know what you’re thinking… how can I defend that?

Let’s do the math. By some estimates, the adult-use recreational market in the U.S. and Canada will be $40 billion. Now consider that the U.S. and Canada have a combined population of roughly 360 million people, which is less than half the size of the total population of Spanish and Portuguese-speaking countries which have a population of approximately 730 million people. Then if you factor in India, as another new market for legal cannabis with a total population of about 1.3 billion people, the total equates to around 2 billion people (when combined with Spanish and Portuguese-speaking populations), equaling almost six times the number of North Americans. And don’t forget, this does not take into account Eastern and Western Europe, Africa or Pacific Rim countries including Malaysia, Indonesia, Australia and more. Bottom line, the end of cannabis prohibition on a global scale creates an absolutely massive market opportunity.

The Legal Cannabis Investment Opportunity in the U.S.
Historic changes in public policy can lead to massive valuation shifts, which in turn can present unprecedented opportunity for financial gain by first movers. The legal cannabis market in the U.S. today presents massive valuation shifts as well as challenges that require a 24-7 dedication to understanding the space and staying on top of its fast-paced innovation and regulatory complexity.

Similar to the end of prohibition for alcohol in the United States, the evolution of legalized medical and adult-use cannabis provides savvy investors with a window of opportunity for significant returns in a relatively short period of time as demonstrated in the chart below, which forecasts the potential market size when new US States will begin sales of medical and adult use cannabis. 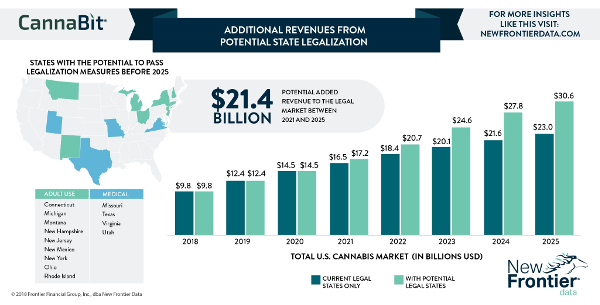 Canada provides a comparable as the country nears national legalization in October 2018. Cannabis company valuations are skyrocketing, as publicly traded Aurora and MedMen have seen astronomic growth through liquidity by listing on the CSE and then leveraging their position to scale up via strategic acquisitions. Canopy Growth Corporation has a market cap of $6.2 billion and Aurora is at $5.41 billion according to recent data from New Frontier.

The Fragmented Market
In today’s marketplace, hyper-growth success stories like cannabis are rare, mainly because larger corporations traditionally possess superior market reach, large sales departments, and access to deep capital to fund the rollout of their products on a broad scale. Unfortunately, that’s not the typical case with the legal cannabis industry. Because of the federal illegality in the U.S., large national and multinational businesses are constitutionally locked out of the market. Federal law continues to classify cannabis as a Schedule I narcotic, a category reserved for drugs such as heroin – ones that are highly addictive and have no medical value – making the use, sale, and possession of all forms of cannabis in the United States (federally) illegal. This federal ban keeps national corporations and institutions on the side lines for now.

Currently, each state is weighing the pros and cons and developing regulatory frameworks independently, with some states only legalizing medical marijuana, and others going all in for adult use, while still others are refraining from legalization entirely. This creates a patchwork of rules and regulations within each state that legalizes cannabis for that state. Due to the newness of the industry and lack of consistent legal precedents in policy-making, challenges and obstacles may differ in each city and state due to the ringed fence nature of the industry. This is the fragmented market. 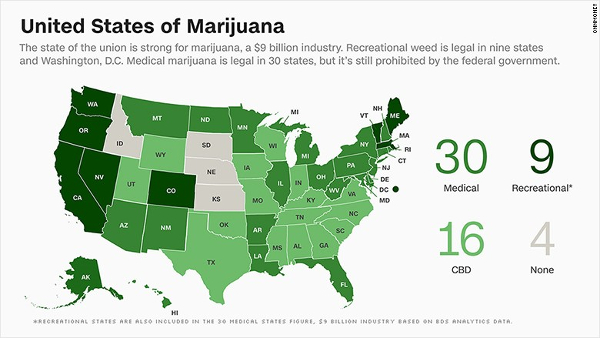 Due to the ongoing federal prohibition, each state is forced to create its own “ringed fence” market, meaning that interstate commerce does not apply with regard to anything that touches the plant. Virtually every state is at a different stage in the evolutionary process of legalizing marijuana, with some states at full adult-use while others are just beginning to decriminalize the plant. Further, each state is also moving at a different pace from a regulatory perspective based on the formalized guidelines and legislative policies created by state policy makers. However, this also creates a window of opportunity.

The Advantage of a Fragmented Market for Investors
Normally, well-funded corporations have the upper hand in a regulated marketplace due to sheer scale and access to expansion funds via capital markets. However, because of a lack of competition at the national level, combined with the fragmented regulatory frameworks that are emerging in a staggered fashion, there is a unique blend of limitation and opportunity for savvy businesses to operate, safely insulated within the ringed fence economy of a deregulated state and temporarily protected from the competitive threat of much larger national players with unlimited resources entering the space.

Industries that are poised to enter the cannabis space include tobacco, liquor and pharmaceuticals, which all stand to gain because of their distribution infrastructures and massive economies of scale. They are also wise to hedge their current strength in the marketplace by gaining control of segments of the cannabis economy and limiting the potential for disruption. When you consider that the global pharmaceutical industry is projected to reach $1.12 trillion by 2022, the importance of a well-thought-out strategy for entering the legal cannabis space becomes evident. For example, studies have shown that when medical marijuana is legalized in a state with significant opioid addiction, opioid use generally declines as do the profits of the suppliers. The fragmentation allows investors to identify best of breed companies with exceptional management teams, valuable IP, and established brands in large emerging growth markets, providing excellent returns through liquidity events as the industry matures.

The Cannabis Ecosystem
Once you really begin to drill down into each category, the scope of the opportunity is enormous. It’s a monstrous industry. In fact, I would argue that cannabis isn’t just one industry, but hundreds of industries converging into a large economic ecosystem comprised of cannabis companies that “touch the plant” and many others that are ancillary to the product. For experienced investors, there are a lot of options. The economic impact is also significant. Last year there were approximately 121,000 workers in legal cannabis, and provided that the industry continues on its current trajectory, the number of people employed could reach 292,000 by 2021, according to research from ArcView Market Research and BDS Analytics. With respect to the number of cannabis-related businesses, estimates project a total forecasted economic impact on the U.S. economy of between $47 billion and $68 billion by 2021, according to Marijuana Business Daily.

About the Author
Leslie Bocskor is the Executive Chairman of Electrum Partners, a business advisory services company in the legal cannabis industry. Please direct inquiries to the Contact form on our website.
Follow Leslie on Twitter: @lesliebocskor
Follow Leslie on LinkedIn: https://www.linkedin.com/in/lesliebocskor

Marni Pankin is a Partner in the Firm’s national Alternative Investment Industry group, responsible for advising clients on the formation and operation of investment funds.
How Marcum LLP Can Help
Given the varying state regulations and state and federal tax implications, now is a good time for professional investors, operating companies, and ancillary services organizations conducting business in the fast growing yet fluid regulatory environment of the cannabis arena to contact Marcum LLP. Marcum LLP provides tax, audit, and business services to clients in multiple cannabis-related industry sectors and jurisdictions.